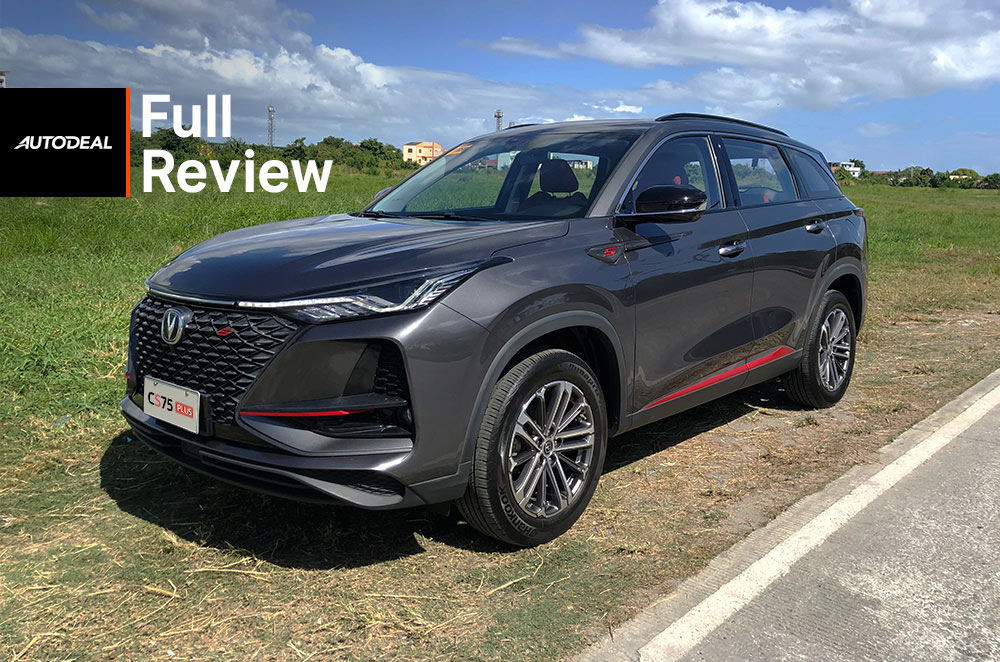 The 2022 Changan CS75 Plus is a lesser-known compact crossover poised to take on the likes of the Ford Territory and MG HS with its capable turbo powertrain and value-for-money features.

This crossover could be worth considering for people looking for an alternative option in a jam-packed crossover market. In this review, we find out if the Changan CS75 Plus could be the next hot crossover in the Philippines.

Performance
Engine Output (HP), Acceleration, Transmission, Handling 4.0/5
Design
Exterior & Interior Design, Quality, Fit and Finish, Ergonomics 4.0/5
Ride Comfort
Cabin Comfort, Suspension, NVH Insulation 3.5/5
Safety and Technology
Convenience Technologies, Active and Passive Safety Features 3.5/5
Value for Money
Amount of the vehicle you get for the price, Fuel Efficiency 3.5/5
What You Will Like
What You Won't Like
How We Do Our Reviews One could argue that the CS75 Plus is the best-looking model in Changan's current lineup. While it shares many styling cues with its recently refreshed sibling, the CS35 Plus, the 75's design feels more proportioned and well-thought-out.

At the front, you get sleek and bright LED headlights and a massive black mesh grille. The sculpted design feels refreshing to the eye and evokes a sporty vibe. Red trims are also prominent and feature generously throughout the vehicle. Over at the side, the CS75 Plus impresses with a sloping roofline adorned with stylish chrome trim. The 18-inch alloy wheels feel substantial, helping the crossover achieve a hefty and well-planted stance. Meanwhile, the rear completes the aggressive look with sweeping, Y-shaped taillights, twin high-mount stop lamps, and slim-style dual exhausts.

Overall, we think the Changan CS75 Plus is a top choice if you're looking for a stylish compact crossover with a modern and sporty design. It may look overly styled to some of you out there, but the right crowd will appreciate the vehicle's youthful looks. The inside of the CS75 Plus is just as head-turning as the outside, if not more so. The red-and-black leather cabin immediately looks and feels premium, and the brushed-metal silver accents do well in adding more eye candy.

Changan's attention to detail is impeccable, as seen on the flat-bottom steering wheel and twin-screen floating displays. We would have appreciated conventional button controls for the air conditioning, but the capacitive touch array is fairly responsive and gets the job done.

Sitting in the vehicle feels comfortable, whether behind the wheel, on the front passenger seats, or at the rear. Fully occupied, five people of average height and build will have no trouble sitting for extended rides. Rear occupants also get air vents and a single USB port for charging, although the lack of dual-zone climate control makes it challenging to balance the temperature for everyone in the cabin. While the panoramic sunroof is not as expansive as we would have liked, it's still plenty of glass and lets enough light in for a more enjoyable drive. There's also a bevy of storage options, the largest of which is in the center console, but the lack of cupholders in the rear center armrest is a tad disappointing.

The cargo area is competitive at 620 liters, so you'll have no problem fitting luggage for a weekend trip out of town. In summary, the interior of the CS75 Plus punches way above its class and price point. The mix of premium materials and stylish touches gives the crossover an advantage over many similarly-priced competitors. The driver's seat on the CS75 Plus not only looks good, but it also does a great job at making you feel sufficiently planted. It's what helped us overlook driving through badly paved roads and deep potholes. While the vehicle's suspension isn't overly lacking, a bit more tuning on Changan's part would go a long way.

Apart from that, the sound insulation is a real treat, and we didn't find much problem relaxing inside the cabin. A thing to note, though, the retractable panoramic sunroof shade isn't solid—if it were, it could have made the CS75 Plus more impervious to outside noise when the sunroof is fully closed. At first glance, one would think the CS75 Plus is one of the most advanced vehicles in its class. In some cases, it is, but there are features we miss, and likely many other car buyers will think that too.

The twin screens are impressive, especially considering how Changan made them look like one piece of glass. However, you quickly find that looks are not enough once you start using them. The touchscreen's operating system is questionable at best but is adequately responsive and does the job. There's no Apple CarPlay or Android Auto, though, so you have to make do with Bluetooth and smartphone mirroring. The eight speakers don't particularly stand out, but they get loud enough.

The TFT driver's display shows you all the information you need at a glance, and the themes are selectable according to the drive mode. You can also set a custom theme in the touchscreen display. For example, it's possible to be in the Normal driving mode but have the Sport theme displaying.

Meanwhile, the 360-degree camera performs admirably, detecting each turn you're making and giving you a live view accordingly. The screen gets sufficiently bright, even blindingly so at night, although it's an adjustable setting. The one gripe we have is the quality of the cameras, which are perfectly fine during the day but suffer in resolution at nighttime.

Not to be forgotten, cruise control also works well and keeps the vehicle at a healthy rev range for optimum fuel consumption. So, the Changan CS75 Plus has all the tech it needs to keep up with most other compact crossovers, but it would be even better with an upgrade to the infotainment system and a camera hardware bump. However, we think the CS75 Plus would benefit from a safety package upgrade like what Changan did with the CS35 Plus, as the lack of active safety features is apparent. We would have liked to see adaptive cruise control, blind-spot monitoring, collision mitigation, and other toys. Changan equipped the CS75 Plus with a 1.5-liter turbocharged gasoline engine, delivering 176 hp and 265 Nm of torque. The crossover is front-wheel-drive (FWD), with a six-speed automatic transmission handling power transfer.

We tested the CS75 Plus in Normal mode first, where it performed well with minimum turbo lag and smooth shifting. In Eco mode, the acceleration dampening is noticeable, and the turbo seems to engage later in the rev range. Sport mode is, as expected, the most fun to drive, giving us immediate power and an even shorter lag time. The CS75 Plus handles well, with adjustable steering assistance offering users maximum control. Steering is light and responsive, giving the impression that you're in a much smaller car. We noticed some body roll during faster cornering, but it shouldn't be a dealbreaker for many people. Also, the brakes don't engage as readily as we liked, as we had to really step on the pedal to slow down or come to a stop. Still, it likely won't be an issue for typical city driving. 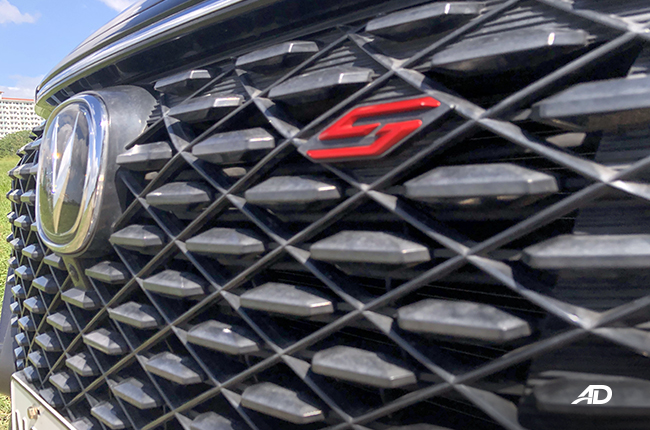 During our fuel economy testing, we found the CS75 Plus getting 6 to 8 km/L in the city and up to 15 km/L on the highway. That's not too far from Changan's official fuel efficiency tests.

Despite that, we found the vehicle performing somewhat questionably in traffic, as heavier congestion can really put a dent on the gas tank. Owners would likely get better figures with more economical driving habits. For the performance it offers, we think the CS75 Plus does just fine in the fuel economy department. Changan currently offers only one model of the CS75 Plus: the 1.5 AT that retails for P1,379,000. Is it worth the price? We think so, especially with its combination of looks, performance, and tech features.

What would make this crossover blow the competition out of the water? Apple CarPlay, Android Auto, better cameras, and Changan's active safety technology suite. If you're not looking for those features, then the CS75 Plus is plenty of crossover for its price.

The hearty turbo engine, fun driving mechanics, and killer looks could be more than enough to sway you over. Changan seems to be on the up and up, and if it can keep things evolving, it might not be long before it becomes a household name in the Philippines. You can compare quotations simultaneously from multiple Changan dealerships. Select your preferred dealers from the list below. Get Notified about Changan Deals