The crossover segment is as hot as the summers are here in the Philippines. Left and right more and more additions are entering the market giving customers a wider range of vehicles to choose from. The same can be said for the compact crossover segment as well. You have manufacturers racing to get a piece of that sweet market segment pie with each one offering customers something different.

One such manufacturer is GAC Philippines, which recently launched the new GAC GS4 into the local market. It brings with it revised styling over its previous version a better feature set, an attractive price point, and a new engine under its hood. That being said, we take a look at what the new crossover offers and how it can stack up against its rivals.

Performance
Engine Output (HP), Acceleration, Transmission, Handling 4.0/5
Design
Exterior & Interior Design, Quality, Fit and Finish, Ergonomics 4.0/5
Ride Comfort
Cabin Comfort, Suspension, NVH Insulation 4.0/5
Safety and Technology
Convenience Technologies, Active and Passive Safety Features 3.5/5
Value for Money
Amount of the vehicle you get for the price, Fuel Efficiency 4.0/5
What You Will Like
What You Won't Like
How We Do Our Reviews 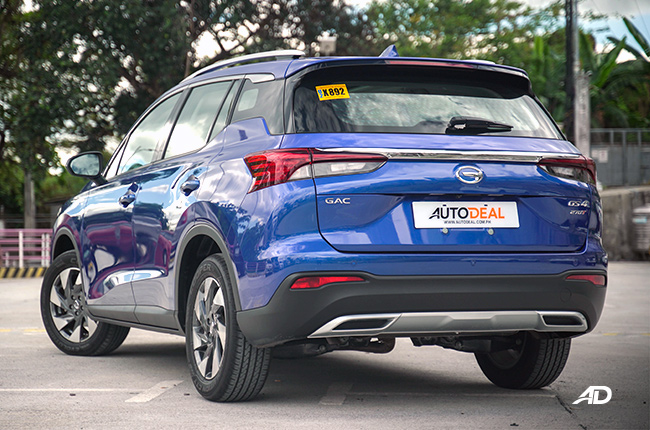 Unlike its competitors which have louder styling, the GAC GS4 goes with a more subtle and sleeker look. The crossover now comes with a much more-rounded face compared to the angular and boxier look of its rivals, which is further complemented by its sharper LED headlights that are paired with LED daytime running lights. Aside from this the GS4 also comes with a massive grille that dominates the front fascia. One thing to note is that this crossover does not come with foglights. It's not a deal-breaker but it's a feature that is standard in other vehicles despite having limited use cases.

Moving on to the side, the GS4 gets 17-inch wheels that are paired with 60 series tires. The crossover also gets a few chrome accents and repeaters on the side. It does also come with a “floating” roof which is to say that the C-pillar has been “cut” to give it that illusion. It also has a line that stretches from the headlights of the vehicle to the rear with a bit of a kink towards the rear quarter panel to give it more depth to its design.

At the rear, it's your average crossover look and shape. You get a nice small spoiler mounted on the tailgate and wraparound taillights that come from the rear quarter panel to the tailgate. It also has a nice chrome garnish above its logo on the tailgate to help break the monotony of the color. Aside from this the GS4 also has a silver lower bumper garnish and faux exhaust tips, which is something we aren’t a fan of. Entering the GAC GS4, you are greeted with a rather tall dashboard that comes with a unique dual-layer design. It is dominated by a massive infotainment screen that is also paired with piano black plastics. Speaking of piano black plastics, these extend to the center console of the car. Aside from this, the GAC crossover also comes with analog gauges which are refreshing especially for its segment. One thing we noticed and liked is the placement of the tweeters which are directly pointed at the front passengers and take the shape of air vents. It's a nice touch that helps differentiate it from its competitors. The crossover also has a t-shaped shifter which is ergonomic and also sports an electronic parking brake with auto-hold.

The second row offers you a decent amount of space, the leather material is comfortable with three passengers being seated at the back not being an issue. You do get air vents at the back and two USB charging points in the way of toys. Aside from this, it comes with standard bottle holders on either door and cup holders on the center armrest. It also comes with a panoramic sunroof for those who want a little more light inside the cabin.

At of the vehicle, the back trunk space is generous as the GS4 comes with 450 liters worth of it with the second row up. With the second row down, this expands exponentially to 1,410 liters which is great for a compact crossover. One thing to note is that it does come with a space-saver spare tire and not a full spare tire. Comfort inside the GAC GS4 is on par with the rest of its rivals. There isn’t much to complain about or to be impressed about. It's just average in terms of its market segment. Body roll is still present but very minimal. The suspension absorbs the bumps well enough and delivers a smooth and pliant ride. Of course, there will be a few bumps that will make their way into the cabin but it's perfectly fine as the seats are supportive. Speaking of the seats, the bolstering for the front seats can be a bit aggressive for some but for us, it was just right. It was like a nice and comfortable hug. Overall nothing to complain about as everything works and feels as GAC intended it to. The GAC GS4 comes with an  8-inch infotainment system that doubles as your reverse camera. It can also act as your climate control as well. Great news for those who have iPhones because this head unit supports Apple CarPlay, not so great news for those with Android devices as the vehicle does not support this feature. Kind of a bummer but there is Bluetooth connectivity available.

Another thing we want to mention is that the GS4 has more controls located near the gear shifter. These controls give you access to the volume via a scroll wheel and you can even enter the main screen with a press of the menu button as well. It's a nice touch if you want to quickly adjust something in the car without having to touch the screen. The GAC GS4 comes with the industry standard when it comes to safety features. This means that the crossover has dual front airbags, side airbags, ABS with EBD, an electronic stability program, hill hold control, hill descent control, and ISOFIX tethers. All of these features put it right in the middle of its competitors. With its feature set, there isn’t much to complain about, however, we hope that GAC will equip its newer models with a 360-degree camera and adaptive cruise control. These are features that many of the GS4 competitors already have and could give the crossover an edge over its competitors. The power delivery of the GAC GS4 is something we liked about the car. It was smooth and had enough torque in it to push your back into your seat. The car’s handling characteristics were also quite spritely for a crossover. Its brakes were also strong and could easily handle stopping the car while fully loaded with passengers and cargo. Body roll was still evident but minor enough that it wouldn’t get people car sick. Manual mode, however, was quite sluggish so it's best to keep the car in Drive even during a spirited stroll out of town. The transmission will easily understand what you want it to do and deliver you the power accordingly. Under the hood, the GAC GS4 is powered by a 1.5-liter turbocharged 4-cylinder engine that pushes out 166 hp and 265 Nm of torque. Power is sent to the front wheels via a six-speed automatic transmission. In terms of fuel efficiency, the crossover presents average fuel figures. It does 8km/L in the city and around 15km/L on the highway which isn’t bad and puts it right in the middle of its other rivals. With great power does come a bit of a drawback and we don’t mind as the powerplant matches the vehicle very well. The GAC GS4 faces some stiff competition in its compact crossover segment with the likes of the Geely Azkarra, MG HS, and Ford Territory being within striking distance of its P1,098,000 price tag. However, since there is only one variant of the GS4 currently available it positions itself against the middle to lower variants of its rivals. While it does lose out a little bit in terms of technology, the GS4 does address a different crowd in terms of pricing where it beats out most of its competitors.

It positions itself as a great choice for those who don’t want to be overwhelmed by too much technology in their crossover and want something fun and easy to use, and this is what the GS4 delivers exactly. It gets the basics done right by having just the right amount of power and space to keep things fun and fuel-efficient at the same time. Its road manners are great and there isn’t much to complain about. It excels in addressing the market that just wants a good reliable car without too many gimmicks and at a very affordable price point. You can compare quotations simultaneously from multiple GAC dealerships. Select your preferred dealers from the list below.

Get Notified about GAC Deals