The sedan segment in the Philippines despite being outshined by the crossover segment hasn’t gone the way of the Dodo just yet. Many automakers are still bringing in new entries into the country to keep it alive and well. That being said, as there are already established players, not many are willing to take them on.

One such car company wants to change that with its entry into the subcompact sedan segment with Geely Emgrand. This new sedan is set to go toe to toe with established names such as the Toyota Vios, Honda City, and the Nissan Almera. Find out what this new vehicle has to offer and what we thought of it with our review of the Geely Emgrand Premium 1.5 CVT.

Performance
Engine Output (HP), Acceleration, Transmission, Handling 3.5/5
Design
Exterior & Interior Design, Quality, Fit and Finish, Ergonomics 4.5/5
Ride Comfort
Cabin Comfort, Suspension, NVH Insulation 4.0/5
Safety and Technology
Convenience Technologies, Active and Passive Safety Features 4.0/5
Value for Money
Amount of the vehicle you get for the price, Fuel Efficiency 4.5/5
What You Will Like
What You Won't Like
How We Do Our Reviews 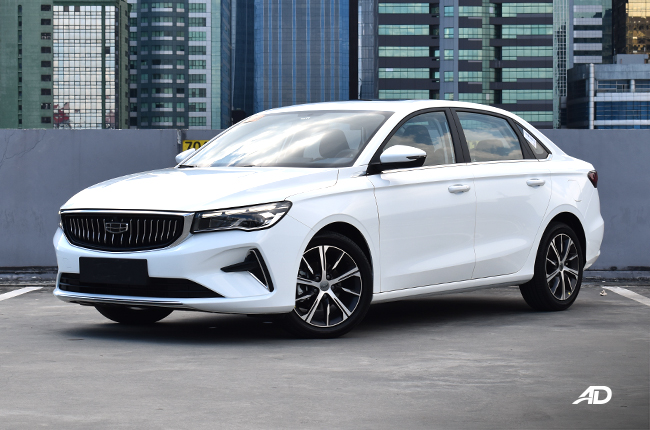 Size is definitely on the side of the Geely Emgrand as it is one of the biggest vehicles available in its segment. It's slightly longer and wider than its closest rival the MG 5. For its form factor, you do get a lot starting with a rather larger grille which is flanked on either side by sleek LED headlights.

Moving onto the side and it's pretty much a standard sedan affair. There aren’t too many character lines along the side of the vehicle but there is this nice beltline that stretches from the front headlights to the tail lights of the vehicle. Aside from this it also gets 17-inch wheels which work well to complement the look of the vehicle. While the tires are a bit of an unknown brand in the Philippines we are pretty sure that Geely will likely change them out for something better later on.

At the back, you get a nicely shaped trunk that has been designed to have an integrated lip spoiler with it. It also comes with wrap-around LED tail lights that come with a unique turning on and off sequence to it. The best part is that these tail lights work and are not just for show. You also get 500-liters worth of trunk space at the back which is great for those trips to the grocery. Just like the rest of the products that Geely has in the Philippines, its theme of premium but with an affordable price tag continues with the Emgrand. It comes with a minimalist dashboard design that works well with the white and blue interior of the sedan. Its air vents blend in with the dashboard to overall give it a clean look. Aside from this, its climate controls also blend in with the overall theme of the cabin, and the large infotainment system acts as a sort of accent for the cabin.  Everything is within reach and the armrest is also positioned nicely to give you support without being intrusive.

At the back, there aren’t too many toys to speak of aside from the cup holders, the rear air vents, and the rear charging points. Aside from this, it's a pretty much standard affair but with a little more bolstering with the rear seats. While it's great for your posture it can be a bit taxing on longer rides. The overall comfort of the Geely Emgrand is on part with the rest of its competition. Its leather is soft yet durable enough to withstand the rigors of daily use but is high quality enough to give you a premium look and feel. NVH is also great with only a few bumps and road imperfections making their way into the cabin now and then.

There is one thing, however, that has been a point of debate in the office. Some of us love the feeling of the bucket seats and the bolstering that they offer, while others want something a little softer. The same can be said for the rear seats, some of us don’t mind that it's a little bit on the stiff side, while others do. While this all boils down to your personal preferences we all agree that these seats do look nice and are generally comfortable. Geely Philippines did a great job at equipping the Emgrand as it gets access to its large 8-inch infotainment system and a six-speaker sound system. Something to take note of is that the sound design for the Emgrand puts the sound stage at the front of the vehicle, which for audiophiles might not be the best setup. Regardless it's still a great sound system for the sedan. It's not a deal-breaker, but it's just something to remember just in case you were wondering about the sound system.

Aside from this, the Emgrand also gets a reverse camera along with reverse sensors. Sadly there is no 360-degree function unlike those found in the Coolray, Azkarra, and Okavango. It also comes with a digital instrument cluster which looks great with the vehicle and further adds to its premium appeal.

Something to take note of is that the sunroof controls of the Emgrand aren’t found on the center console or dashboard, you have to go into the infotainment system in order to open or close it. While it takes some time to get used to as there is a bit of menu juggling involved it wasn’t a deal-breaker for us as we were just happy to have the feature in the vehicle. Overall it's a great amount of tech that many will appreciate but will not be overwhelmed by. In terms of its safety, the Comfort Emgrand comes well equipped for its segment. While it doesn’t come with adaptive cruise control or automatic braking it does come with a lot of the kit that is now considered to be industry standard or above it. The sedan comes with front airbags, front row side airbags, side curtain airbags, ABS with EBD, traction and stability control, hill start assists,  immobilizer, cruise control, a tire pressure monitor system, and speed sensing door locks all as standard. All in all pretty great equipment for a sedan that is competitively priced. While the rest of the Geely Philippines local lineup is sport and quick, the Emgrand takes a different approach. It goes for a smoother experience as it only has 102 hp and 142 Nm of torque under its hood thanks to a 1.5-liter naturally aspirated engine. It also sends power to the front wheels via a CVT as opposed to the wet DCT found in its other stablemates. This means that the sedan is tuned more for fuel efficiency rather than a sportier drive which is great, especially with today’s fuel prices.

As it comes with a CVT don’t expect it to respond quickly when you floor the accelerator. The transmission responds to more gentle inputs. If you feel the throttle gently the Emgrand will do what you ask of it and accelerate. It's not too quick but it will get you to highway speeds and beyond.

When it comes to handling, the sedan leans more towards the comfortable side. If you push it you will feel the weight of the vehicle working against you and you will notice that it isn’t as dynamic as the Coolray which shares the same platform as. Despite this, it does give you a smooth and pliant ride which many will appreciate about it. After all, this sedan was made to be a comfortable daily driver which Geely has executed very well. As this was made to be a city car we can expect to see great numbers from the Emgrand. In the city, we got 10km/L while on the highway we got 21km/L. All in all great numbers. For those who want to take the sedan to Baguio to see if it can handle the uphill segments and the twisties, we are happy to report that it can. We even did a quick trip to Tagaytay with Geely Philippines themselves and recorded great numbers with 12.6km/L being our fuel economy for the round trip. The Geely Emgrand in its Premium variant comes competitively priced. It can be had for P908,000 which puts it right in contention with the mid-tier variants of the Honda City, Nissan Almera, and the Toyota Vios but with all the bells and whistles. This makes it an extremely attractive alternative, especially for those who want a little more room and space inside a well-appointed cabin.

All in all the Geely Emgrand is for those who want a reliable city car that isn’t a gas guzzler. It offers you plenty of space and features all at an affordable price. It may not be the most powerful option out there but it can go toe to toe with its rivals in terms of what it offers. It has the makings of a great Vios challenger and we are pretty sure that we will see many more examples of the Emgrand plying the streets of the Philippines soon. You can compare quotations simultaneously from multiple Geely dealerships. Select your preferred dealers from the list below. 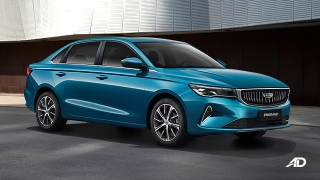 Get Notified about Geely Deals