If flexibility is your main criteria in buying a vehicle, then the Ford EcoSport subcompact crossover can be counted as one of the best choices for a brand new car. Seated as one of Ford Philippines' three best-selling vehicles, the EcoSport received a major design refresh in August 2018. Not only was its exterior got even sleeker, but there's also a new engine option to make the range even more competitive in the local market. Inside the refreshed Ford EcoSport, you'll find a number of new things that, in comparison with the previous model, makes it more pleasant to look at and feel. The most noticeable thing new to the cabin is the eight-inch floating display screen that comes with Ford's SYNC 3 on the Titanium trim.

The Ford EcoSport is offered in four trims in the Philippines: 1.0 EcoBoost Titanium AT, 1.5 Trend AT, and the 1.5 Trend MT as the base variant. The top-range Titanium variant receives top-of-the-line perks including six airbags and automatic start/stop engine system. For the engine, there are now two mills available for the American subcompact crossover. The 1.5-liter Inline 4-Cylinder Ti-VCT petrol engine is still available though it was improved in performance. This power plant now gives the car 121 hp and 1150 Nm of torque. A smaller turbocharged 1.0-liter EcoBoost engine was added to the range. It can put out 123 hp and 170 Nm of torque. There's also a new 6-speed conventional automatic transmission apart from the still-existing 5-speed manual gearbox.

The Ford EcoSport was launched in the Philippines back in January 2014 – aimed for budget-conscious car buyers who want a flexible vehicle in a small package. Since then, it has started the subcompact crossover revolution in which other brands followed suit in the years to come.

In August 2018, Ford Philippines launched the refreshed version of the EcoSport. Carrying a new face and a set of powertrain/transmission setup, the new EcoSport aims to maintain its position as a top-selling vehicle in the Philippine market.

The Ford EcoSport sits on Ford’s B2E platform and has a front-engine, front-wheel-drive powertrain layout, with two gasoline engine options to choose from. First is the 121-hp 1.5-liter Ti-VCT while the second one is the 123-hp turbocharged 1.0-liter EcoBoost GTDi that came with the facelifted model. Transmission options are a 5-speed manual and a 6-speed conventional torque converter automatic. Only the front wheels are equipped with disc brakes.

Without the early kick from the turbo, the EcoSport’s 121-hp 1.5L engine lacked grunt at low RPMs, which meant that at slow paces and in-city traffic, you would need to press deeper on the accelerator in order to get a satisfying pull. The 1.0L EcoBoost mill, on the other hand, provides the needed pull every time, with the turbo kicking in at around 1,500 RPM. With this, even hill climbs and tough parking ramps were a cinch.

As for handling, the EcoSport is easily maneuverable in tight spaces but there’s a bit of understeer when tackling curves at speeds. The steering wheel is weighted nicely but a little tweaking electronically power-assisted steering is needed.

Trend variants and below still retain a touchscreen infotainment system, but lack key features like Apple CarPlay and Android Auto—it still has Bluetooth connectivity, however. The lower variants lose some of these features but ultimately, the EcoSport is one of the most loaded crossovers in its class.

The Ford EcoSport still has its boxy shape, sculpted sides, and the rear gate-mounted spare tire compartment, which all served as its signature appeal on the local public roads. However, there are new and bigger headlights, as well as wider grille, and minus the slim upper grille that used to connect both headlights and hold the emblem.

To differentiate the range-topping EcoSport EcoBoost trim from the rest of the range, it has HID Projector headlights. Almost all of the variants get 17-inch alloys.

The Ford EcoSport employs exemplary cabin quality in terms of materials used. The range-topper has leather trimmings, while the lower variants get polyurethane materials and fabric upholstery. Space up front is cavernous but legroom at the rear seats is a bit limited. Trunk space is expected for the vehicle’s size but can be expanded by folding the rear backrests. The swing rear door is a bit heavy, though.

The Ford EcoSport is loaded with safety features, starting with dual front airbags that are present across the range. The range-toppers get side and curtain airbags, as well, while the mid-Trend variant has extra side airbags. Other standard safety features include ABS with EBD, traction control, stability control, emergency brake light, front seatbelt reminders, and ISOFIX child seat tethers.

What you will like in the Ford EcoSport is the choice of materials used in the cabin, regardless of the variant you’ll choose. You’ll also love the SYNC3 infotainment system in the Titanium variants as it’s seamless to operate and pair with smartphones.

On the other hand, you might find the limited rear legroom to be unappealing, as well as the hesitation from the new six-speed automatic transmission. 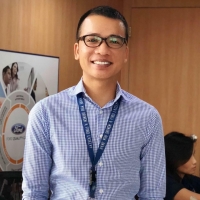 View the most compared cars versus the Ford EcoSport 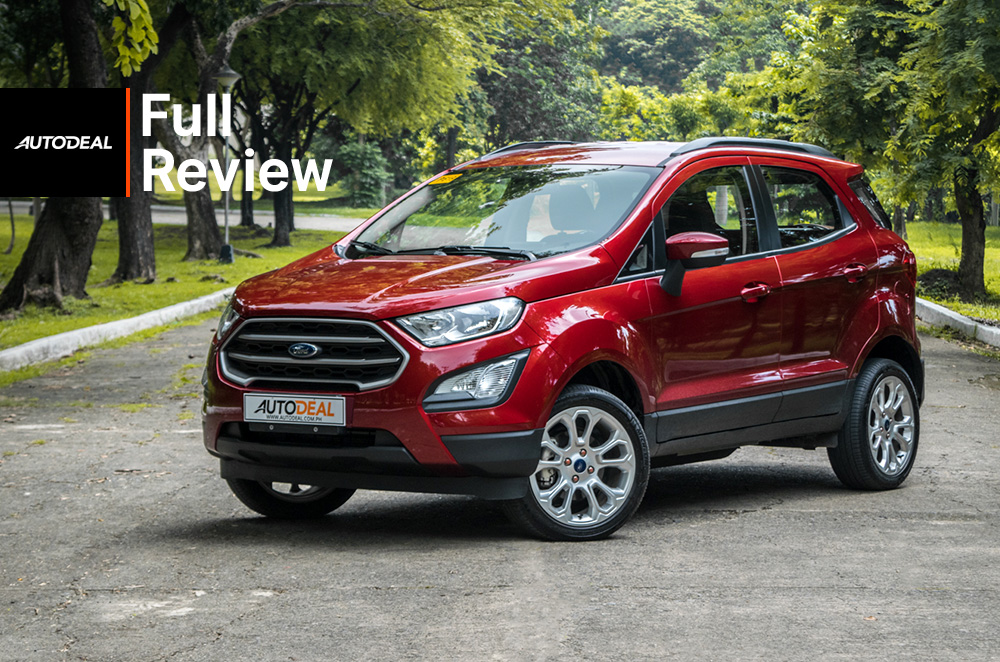 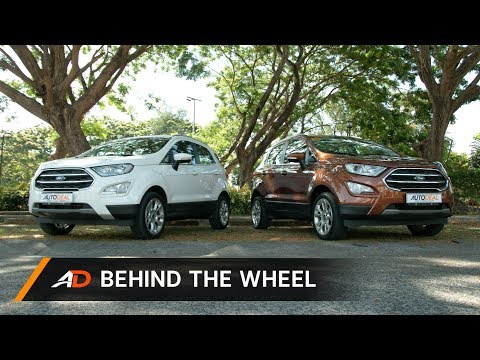 Read reviews from verified car buyers and find out from real owners what it's like to own Ford EcoSport.

What are the available colors for the Ford EcoSport?

Does the Ford EcoSport have Apple CarPlay and Android Auto?

Yes. All variants of the Ford EcoSport come with Apple CarPlay and Android Auto.

Is there a 4x4 variant of the Ford EcoSport?

All variants of the Ford EcoSport are front-wheel drive. The Philippines has yet to get an all-wheel drive or 4x4 variant of the EcoSport.

Is there a diesel Ford EcoSport in the Philippines?

Unfortunately, no. Diesel variants of the Ford EcoSport never reached the Philippine shores.

Does the Ford EcoSport have sunroof?

Yes, they have. Titanium variants of the Ford EcoSport come standard with a power sunroof.

Get Notified for Ford EcoSport Alerts